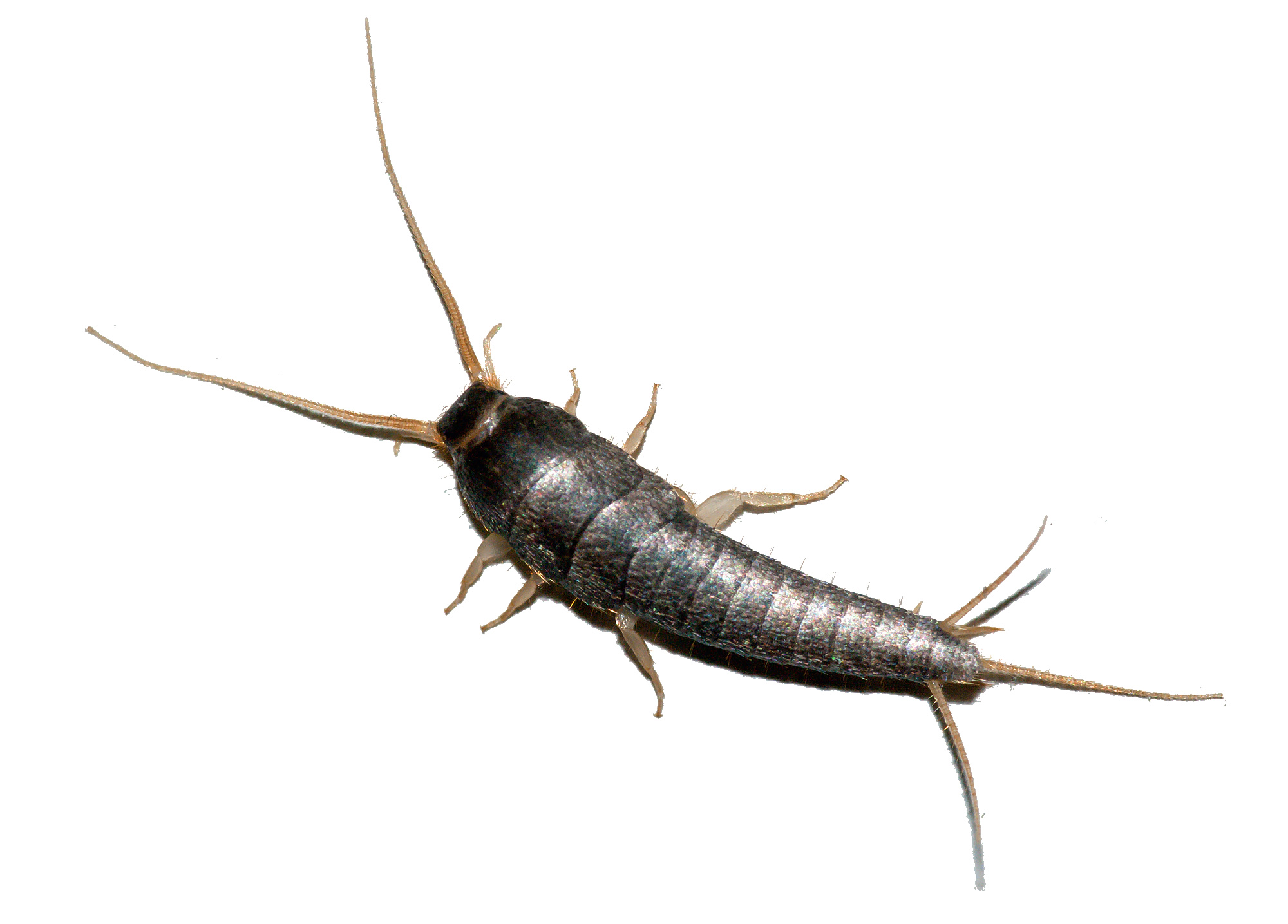 You are here: Home / All About Silverfish

They are approximately ½ inch long and have a uniform silvery color on the upper surface. Silverfish have long and slender bodies with some broadness at their head. They also have a regular tapering toward the rear. Silverfish are grayish-blue in color and are harmless. The serpentine creatures are not fun to have around the house. They eat dead skin cells, books, starch materials, and mold that grows on wood roof shake shingles.

Where do Silverfish Live?

Silverfish love dark, cool and wet environments such as sinks, basements, wall voids, bathtubs, kitchens and closet shelves. However, some do not mind being in warm humid environments. They are nocturnal and move very fast and are secretive so if left undisturbed they can eat and breed wildly at night. Unfortunately, an infestation can remain unnoticed for a long period thus enabling exponential growth. Silverfish need a lot of food or molds to survive. Their preferred diet is high in sugar, starch, or protein

How do Silverfish Reproduce?

Before they mate, silverfish do some love dances and perform a ritual with three phases that can last for more than an hour. The first phase involves a process where the male and female stand facing each other with their trembling antennae making content. They then back off and go back to this position. In the next phase, the male runs away, and the female goes after him. The third phase entails the male and female standing side by side in a head-to- tail position as the mail vibrates its tail against the female. The male finally lays a spermatophore that then goes to the ovipositor of the female to fertilize eggs.

The number of eggs that female lays vary depending on the species. Some species produce a few eggs while others lay gatherings of 2 to 20 eggs.   The eggs have an oval shape and are white in color. The female lay clusters of eggs less than 60 at once and deposit them in tiny crevices. Silverfish have the ability to lay eggs at any season in the year and the eggs hatch in about three weeks. They then grow from larva to adult in about 3-4 months. After the nymphs hatch, they are white in color and look like a small version of adults. When they moult (shed), the young silverfish then develop a grey appearance that has a metallic shine. They ultimately grow into adults after three months to three years and go through many moultings during their lifespan and sometimes 30 in one year. They are among the rare types of insects that keep molting even after adulthood.

Common Silverfish in the United States

There are several species that is common in the United States.

These silverfish live indoors and often infest attics especially if the roof is built with wooden shingles. They can also be found outside during Summer.

The species are often indoors in the Southern California. It loves areas that are drier than what majority of silverfish do. You can find them in attics and crawl spaces but may also infest water pipes in the bathroom. They lay eggs in cracks and clusters of 2- 30 and they hatch in around 60 days at room temperature. When the nymphs hatch, they have no scales as they show in the fourth instar. Grays can live up to 5 years.

How to Getting Rid of Silverfish

When you come across silverfish in your house or home area, you need to get rid of them. Here are some ways to prevent and remove them.

You can do away with unnecessary moisture like condensation and faulty plumbing. Silverfish like the humidity and as a result, the more the moisture, the higher the likelihood of infestation.  You can also use a dehumidifier to lessen the moisture content in the air since it is important for the survival of the silverfish. Other methods of dehumidifying include ventilating attics and closed rooms and removing standing water. You can also use an air conditioner. It is also important to vacuum any crevices and cracks around your home frequently using a narrow tip. Go ahead and also get rid of accessible sources of food by keeping the food in the pantry in tight containers.

In case you already have a silverfish infestation in your home, spray the perimeter of your home using a residual insecticide. Use a narrow band to spray the inside of your perimeter to kill the silverfish as they move all over the structure. You can also spray the exterior of the foundation to keep them from going into the structure. You can also apply insecticides and chemical powders in crevices and cracks.