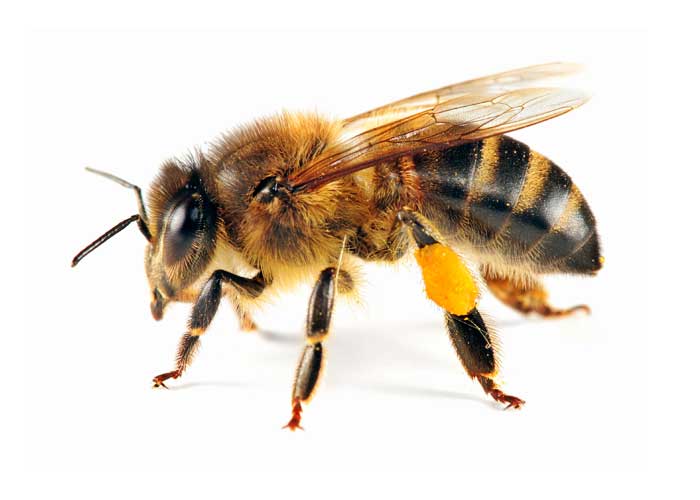 You are here: Home / All About Bees

A bee is a winged insect that feeds on flowers with branched body hairs. Bees depend on pollen for protein and flower nectar for energy. The insect has two big compound eyes and three simple eyes and can see colors with the exception of red. Their eyes combined with the sense of smell enable them to locate flowers they need to gather pollen. A vital source of food for bees is pollen. A good number of bees have unique feathery body hairs that assist in gathering of pollen. Adult worker bees amass pollen because it is nourishment for the adult and baby bees, called larva. The pollen has protein and additional nutrients essential to their survival. While looking for nectar and pollen, bees unintentionally transfer pollen from the male to the female parts of flowers. The pollen they lose when they fly from one flower to another is substantial to plants since some pollen falls on the reproductive parts of other flowers that are in the same class, leading to cross-pollination.

Where Do Bees Live?

Bees mainly live in colonies. There are three diverse types of bees in every colony, and they include the queen bee, the infertile worker bee which is the female and the male drone bee. They favor to live close to wildflowers and will construct their nests in old wood. Bees normally stay away from areas where insecticides are present. Since the natural behaviors favored by bees are attractive, farmers and gardeners put up places that are welcoming to bees to draw them to their property.

The only bee in the hive that is sexually developed is the queen. She is the biggest and can be known by her extended abdomen. The worker bee picks which eggs will turn out to be queens. When a queen is born, she sets out on a mating flight, and it is the drone bees that fertilize her. The fertilization flight can last the queen’s entire lifespan and can live longer than all the bees. The queen is mainly productive the first two years, and some say she can live for longer. The drones are the male bees. Their job is to mate with a queen and do not gather food. During winter time, they are usually thrown out of the hive since resources are scarce. Even though they are small, worker bees are the strongest in the colony. They are females, and work themselves to death. At the start of their lives they are nurse bees, and then they adjust to field and scout bees. The worker bees also defend the hive and make comb. They live only about a month or less but during the winter they can live longer.

How Do Bees Reproduce?

The queen bee is the only member in the colonies that can reproduce. The drone’s job is to mate and usually die after fulfilling their task. The queen only lays eggs for the extent of her life. The worker bees carry out many jobs essential for the existence of the hive. They clean the hive, gather pollen and nectar to nourish the colony, and look after the offspring. Honeybee queens have a lifespan of two to three years though some can live up to five years. The lifespan of a female worker bee is only six weeks. The queen usually lays the eggs on the back of a clear wax cell in a beehive, and they hatch into a larva. After a few days, the larva stops to feed, and worker bees close the cell. The larva twirls a silky layer and becomes a pupa. The body now changes into a winged adult. Bees are social insects; they live in colonies each with their own jobs. Some gather nectar and pollen, others maintain a clean hive, shoving out any dirt.

They are private bees. Carpenter bees construct nests for themselves and only feed their own young. They get their name from their skill to drill through wood. They can sting over and over due to the fact their stingers are not barbed.

Miner bees choose a place with sunshine and unlikely to get flooded. They construct long tunnels a little wider than their own bodies. Some prefer the company of other bees while others do not want any neighbors. They stay solitary and each bee digs her own nest.

Hole nesters take advantage of existing holes made by other insects or utilize rock crevices to build their nests.

There are more than 4000 species of bees found throughout the United States with the only exception being high mountain areas.  Most of the bees in the United States can be classified into one of five families.

Apidae are the largest bee family in the United States.  There are approximately 50 species of bumble bees in the U.S.  Bumble Bees are large and furry and are mostly black with stripes of yellow and sometimes white or orange.  Bumble bees are ground nesters that search open cavities under porches, sidewalks, driveways, and trees to name a few common locations.  Carpenter bees are similar to bumble bees in size and color with the exception they are not furry.  Carpenter bees are nearly hairless and with a glossy abdomen.  Male carpenter bees like to defend their turf and are more than happy to chase people, thankfully only the females have stingers.  Blueberry bees are only active for a few weeks while blueberries are in flower. Cuckoo bees red or yellow white white markings and some times are mistaken for wasps.  They like to fly low looking for nests where they can sneak in and lay eggs.

Megachilidae are mason & leaf-cutter that use leaves and mud to construct their nest.  Megachilidae’s care pollen on their abdomens and not on the backs of their legs.  The blue orchard bee have a bluish look and pollinate fruit trees in the western United States.

Halictidae are a colorful lot with many different colors include green and yellow.  They are good pollinators of alfalfa

Andrenidae are ground nesters that are mostly dark but can also have a multitude of colors.  They are active in the early spring while the next generation is developing underground.  Andrenidae’s focus on pollinating azaleas, willows, maples, violets, and other spring wildflowers and apple blossoms.

These are are often mistaken for wasps as they have an intimidating looks with black bodies and a yellow mask with black and yellow legs.

How To Get Rid Of Bees

Normally a huge beehive is hardly ever a danger but obviously a hive or nest can pose some danger to animals and kids.  Before ever dealing with bee removal be sure that you aren’t allergic to bee stings.  Bee stings can ge fatal to highly allergic people.   When in doubt hire a professional.

Wear appropriate clothing.  Preferably a light color with a smooth texture.  Wear a veil and leather gloves to protect yourself and make sure your not wearing anything scented as this could cause problems for you.  Cologne, after-shave, scented deodorant are a no-no.

If you are dealing with honey bee the biggest issue if a hive gets in your walls, attic, or soffit is the potential for rotting honey which can cause major structural issues and is a major pain to remove.  Chimneys can be a main target for bee’s looking for a place to make a nest.  If you see bees making regular entrance and exit flights at a specific location there is a good chance an active nest is nearby.

Winter and late spring are the best times to address hives as that is when are at their smallest and the colder it is the less active the bee’s will be.  Bees are least active in the evening are morning hours.  A good insecticide like Sevin will usually do the trick to kill of bees.  If the bees are in an exterior wall bore a hole from the outside into the next and then apply your insecticide.  Another alternative for ground nesting bees that aren’t near a structure is gasoline and match.  Just be careful and ensure you have a hose ready.

Place any nest remnants in a securely tied plastic bag a and inside disposal container with a tight lid.  Be sure to clean the nesting area with soap and water and seal any potentail points of entry.  Potential solutions are screens or sealants.

There are plenty of DIY bee sprays you will want to dispose of hives and ensure you don’t need to deal r people. If bees are inside your home, you require help quickly. Dealing with rotting honey and making sure the bees do not come back are the main considerations. Do not try to get rid of large a swarm of bees yourself, let the skilled beekeeper or a pest control professional undertake such a job. Through inspectional of possible nesting areas, you can prevent bees from nesting near your home.